A Guide to the Church by Rev L G Ouvry

Welcome! We hope you enjoy the highlights of the inside of All Saints Church in Grayswood.

The Stone Carvings (1) on either side of the Entrance to the Porch represent Church and State.

Facing the main entrance is a Memorial Tablet to Mr A H Harman (2) and to the left, under the West Window (3),  a Tablet commemorates The Reverend John Chandler, who as Vicar of Witley ministered in Grayswood from 1881 until 1894.

The inside of the church has vaulting of pitch pine and the pews, choir stalls and pulpit are of oak.

The two original Stained Glass Windows are those at the East End, the Ascension of Our Lord (4), and in the North Wall of the Transept, The Resurrection (5). The other Windows surrounding the Aisle were given in the first 20 or 30 years after the Church was built and are in memory of various parishioners, each illustrating a different saint and incorporating an appropriate dedication. The window depicting the Good Samaritan (6) in the South Wall is particularly noteworthy, while many find the inclusion of Sir Galahad (7) in a gallery of saints intriguing. The grail in the apex of this window is believed to be one of only two in stained glass in the country. The other is in Glastonbury.

The large West Window (3), dedicated to St John and St Barnabas, is by Kempe whose symbol is a sheaf of wheat (near the bottom of the left hand corner).

The Font (8), on a base of York Stone, is itself of Monk Stone, with an oak cover given by the parish in memory of the second vicar, The Reverend Robert Bond.

Moving down the Aisle towards the brass eagle Lectern (9), we note that it was presented in memory of The Reverend John Chandler, the Vicar of Witley, whose memorial plaque we have mentioned which gives some indication of the close ties which existed between the two Parishes.

On the Centre Column (10) between the Chancel and the Transept are carved representations of the Evangelists: Matthew, Mark, Luke and John; and above them, in the roundel, a large carved stone angel. Wooden carvings of Saints Peter and Paul stand over the Lectern (9) and the Pulpit (11).

The Painted Figures (12) behind the altar of the four great Latin Doctors of the Church alternating with six archangels are to the left Michael, Jerome, Gabriel Ambrose of Milan and Raphael; to the right  Uriel, Augustine of Hippo, Chamuel, Gregory the Great and Jophiel. [The two embroidered panels of the Annunciation hang below the paintings and are thought to be original.]

On either side of the East Window (4) are the figures of Moses and David.  The unusual carved relief of the Nativity Scene on the South wall depicting the Adoration of the Magi (13) was carved by the architect Axel Haig and is a copy of a much larger which he made for Visby Cathedral.

The fine Organ (14) was given to the church in 1925 by Mr Bailey of Higher Combe and the makers were William Hill & Son, and Norman and Beard Ltd.

The Harman family are also commemorated by the East Window (4), given by the wife of the benefactor in memory of her son,  and the Reredos, erected in memory of Mrs Harman by Mr Harman, who founded Ilford Photographic.

The Reverend John Leake, who held office as the the first Vicar of the Parish for 29 years, is commemorated by a Tablet (15) to the left of the high altar.

The heavily carved Oak Chairs in the Sanctuary are a Parish Memorial to King Edward VII and were re-upholstered by two parishioners [in the 1980s].  On the High Altar (16) are usually to be found two iron Candlesticks and Cross given in memory of The Reverend Lionel Ouvrey, Vicar from 1961 to 1974, who wrote the first edition of this Guide.

Additional furnishings and memorials continue to be presented to the Church from time to time, providing richness and colour, historical interest and and a strong awareness of the continuity of worship here. 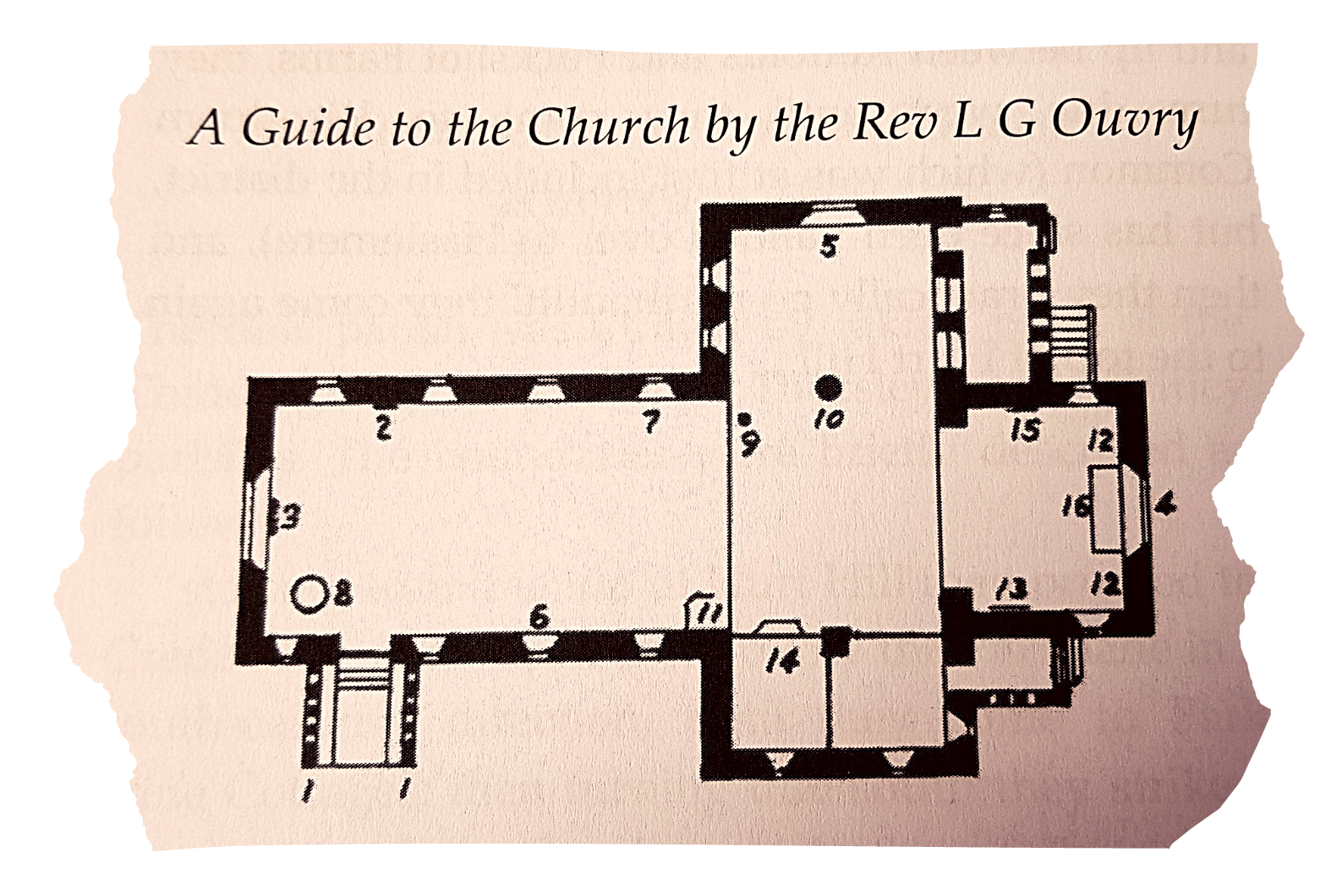 (3) West Window: and below, a Memorial to the Revd Chandler

(9) The Lectern, and above St Peter

(10) The Evangelists and above the Stone Angel

(12) The Painted Figures - Moses and David