The painted figures represent the four Latin Doctors of the Church and the Archangels.

Angels are mystical beings that act as instruments of God (Greek: messenger). The Messengers intercede directly and individually between God and humanity. Two Archangels are named in the bible (Gabriel and Michael) and the others are commonly portrayed from apocryphal sources. The Book of Revelation records seven angels (Rev 1:20) but only six are painted here.

The 'Doctors of the Church' are writers and teachers whose work helped shaped Christian thought and doctrine. ('doctor' here meaning 'teacher').

The paintings were completed by Carl Almquist.

The Restoration of the Paintings was the second objective of the Centenary Restoration Fund (2002) and the work was carried out by Philip Young, a conservator. He commented that the "the dull and and grey tone of the paintings is the intended appearance" probably because they were and are ancillary to the window and were intended not to detract from its dominance. 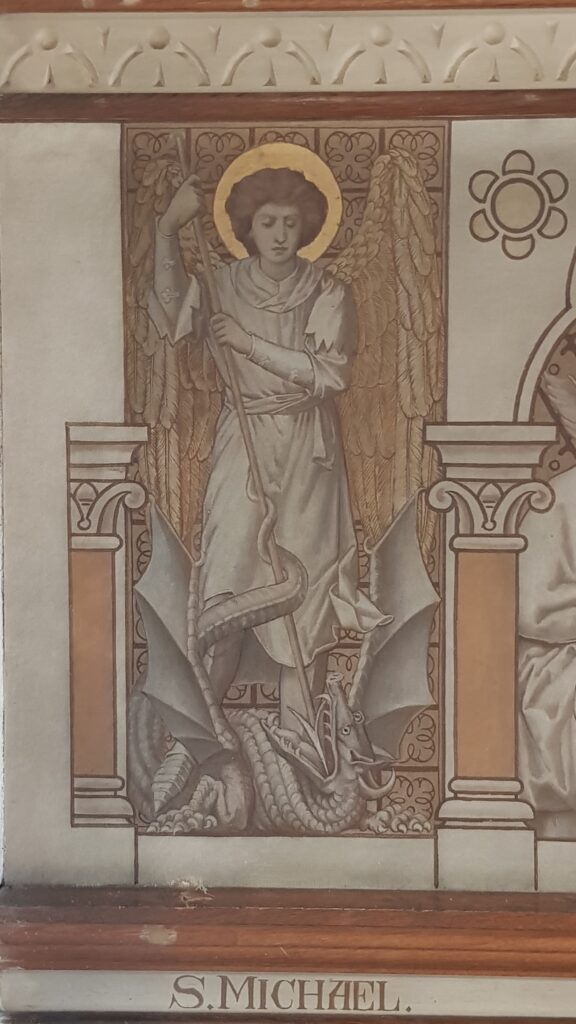 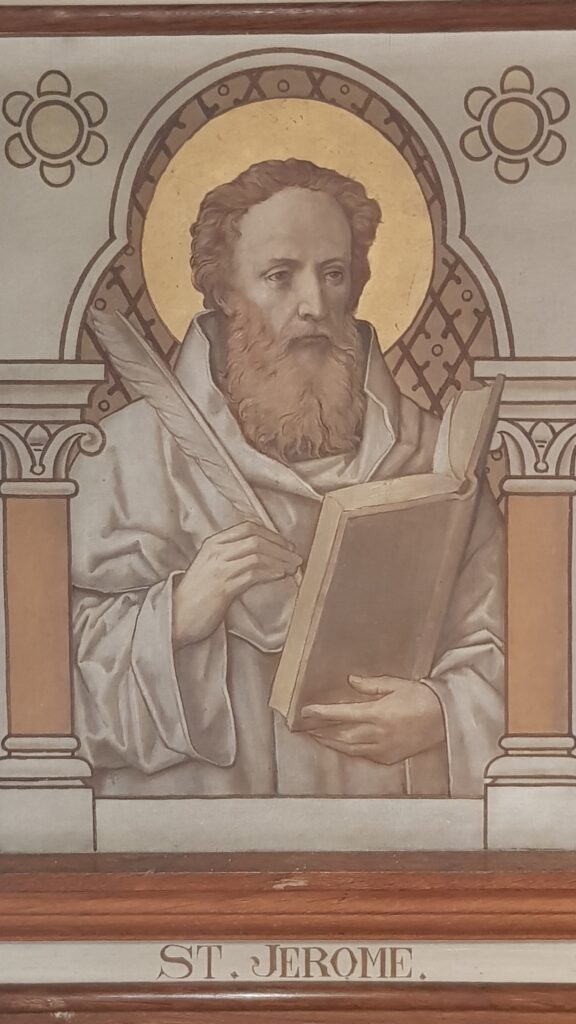 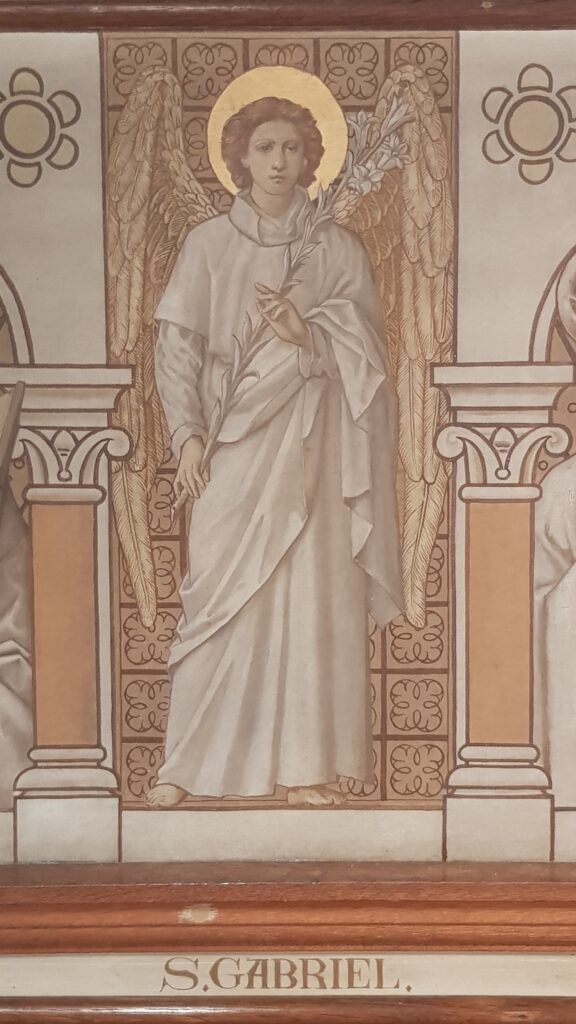 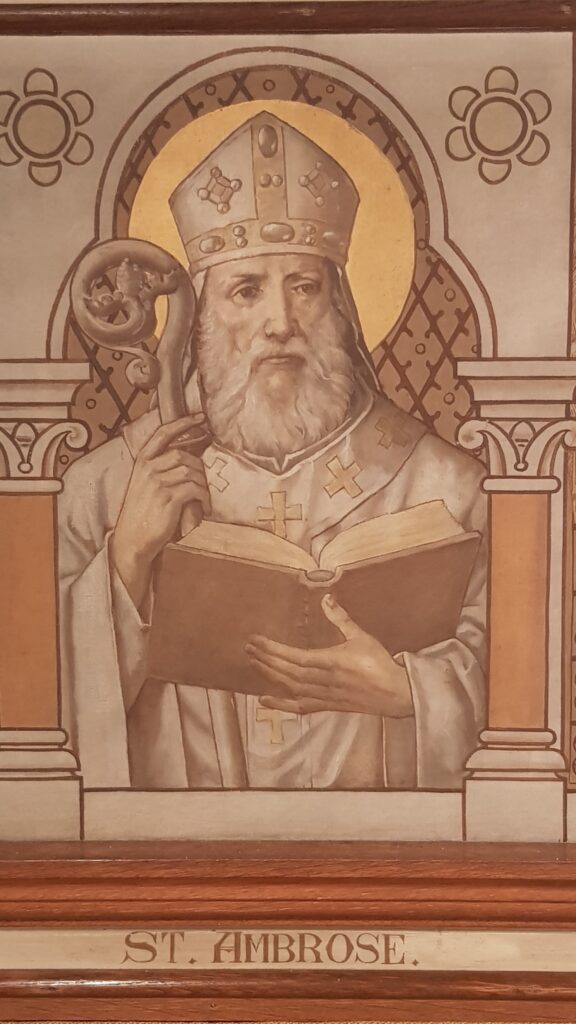 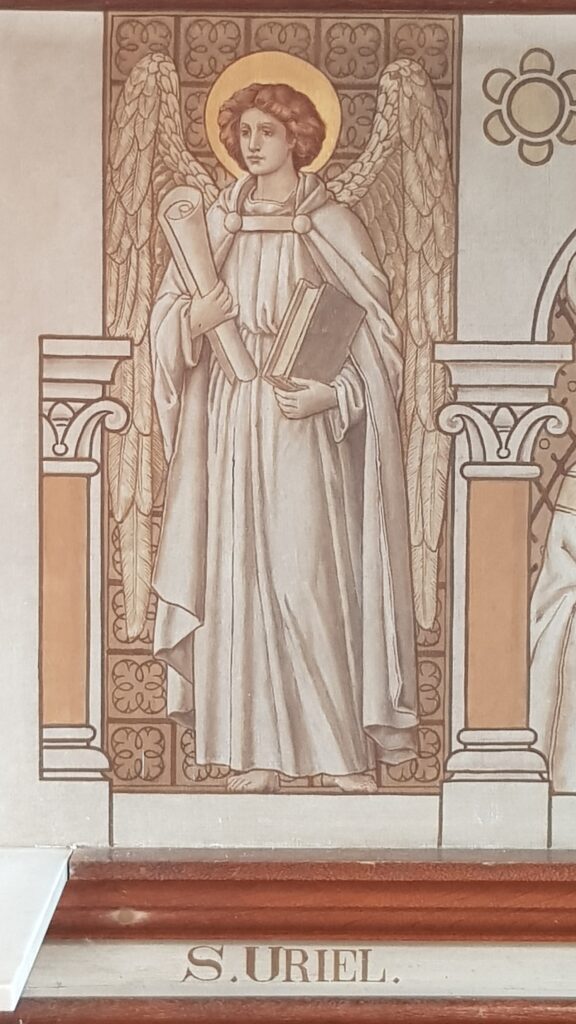 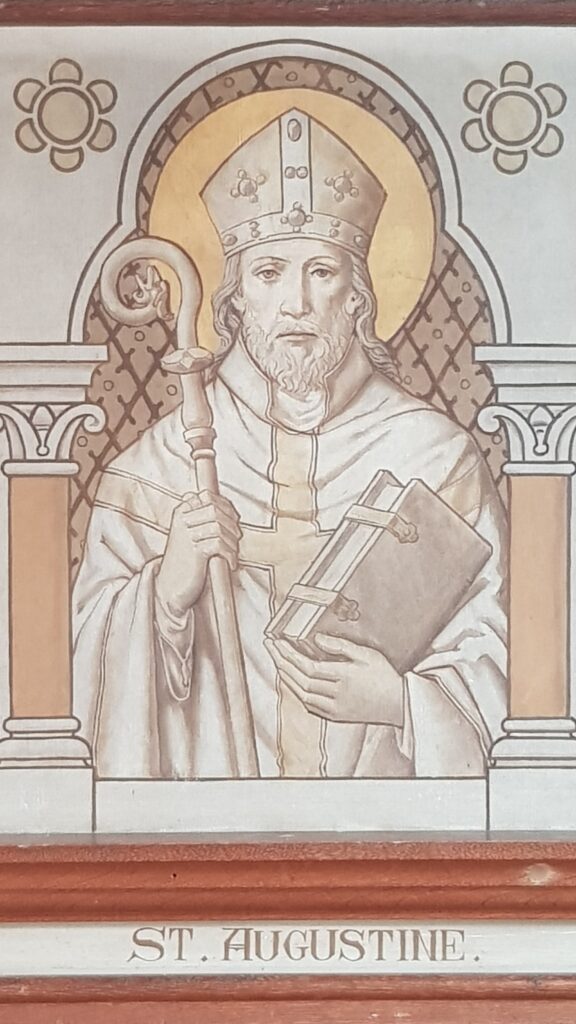 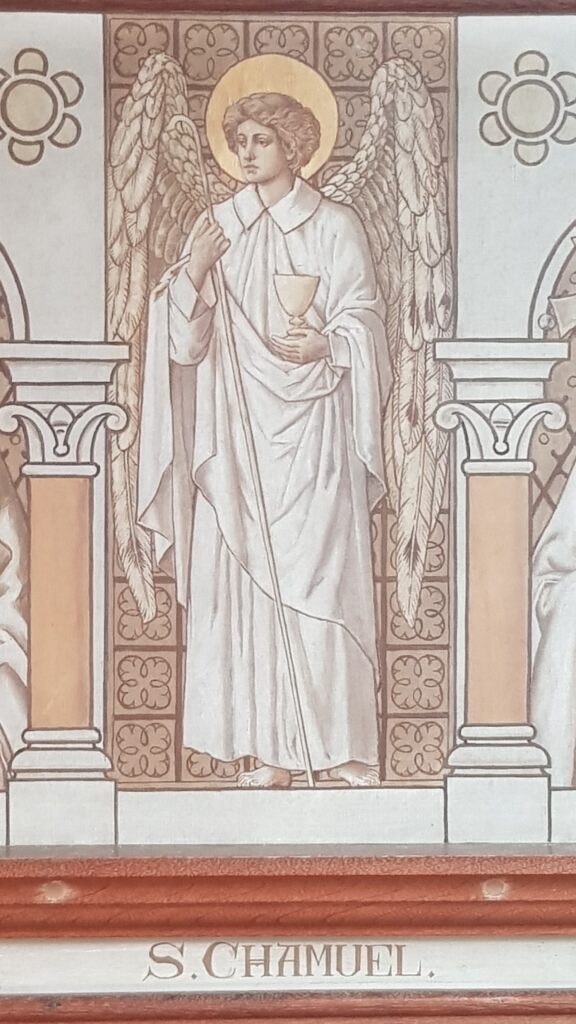 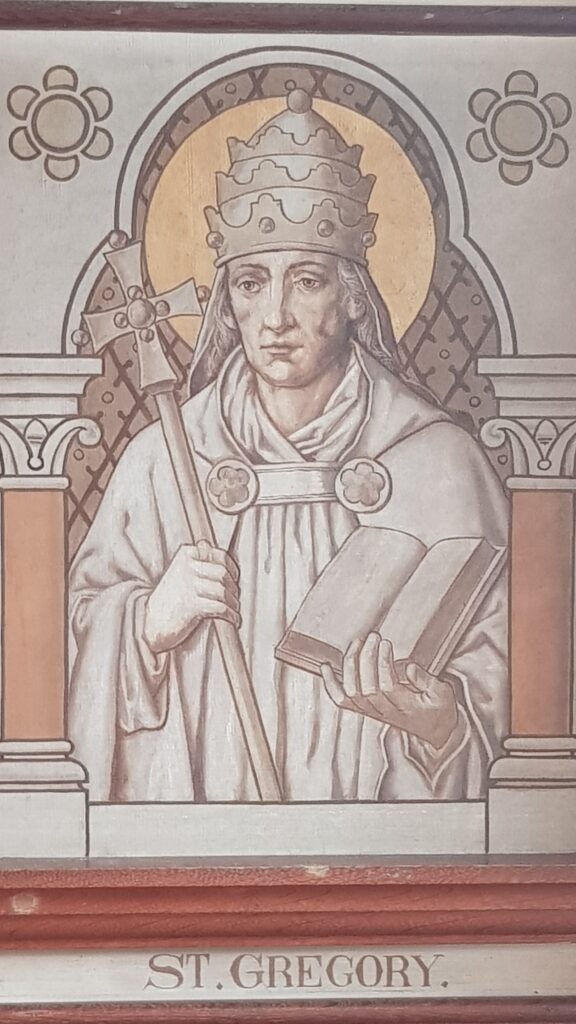 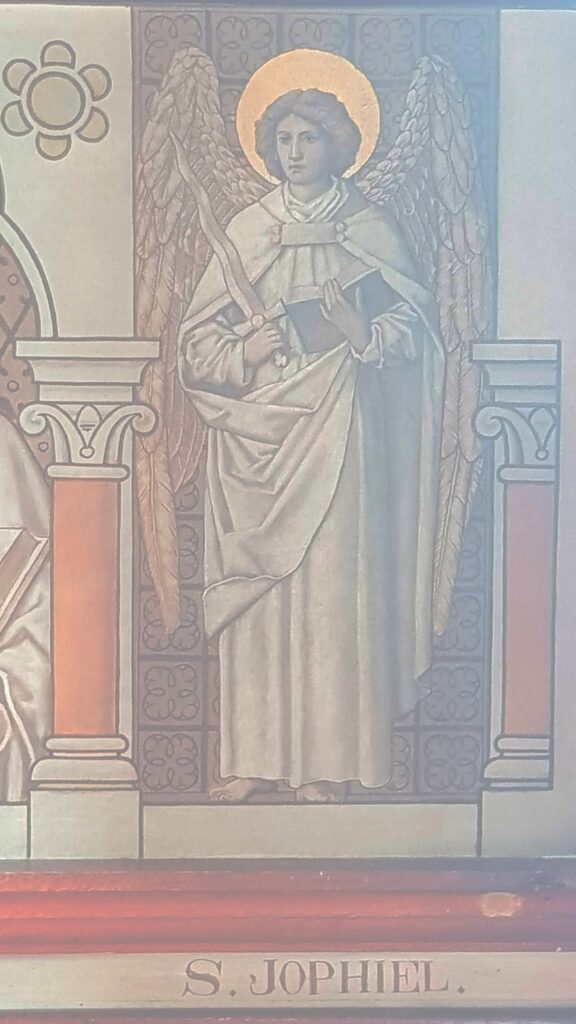 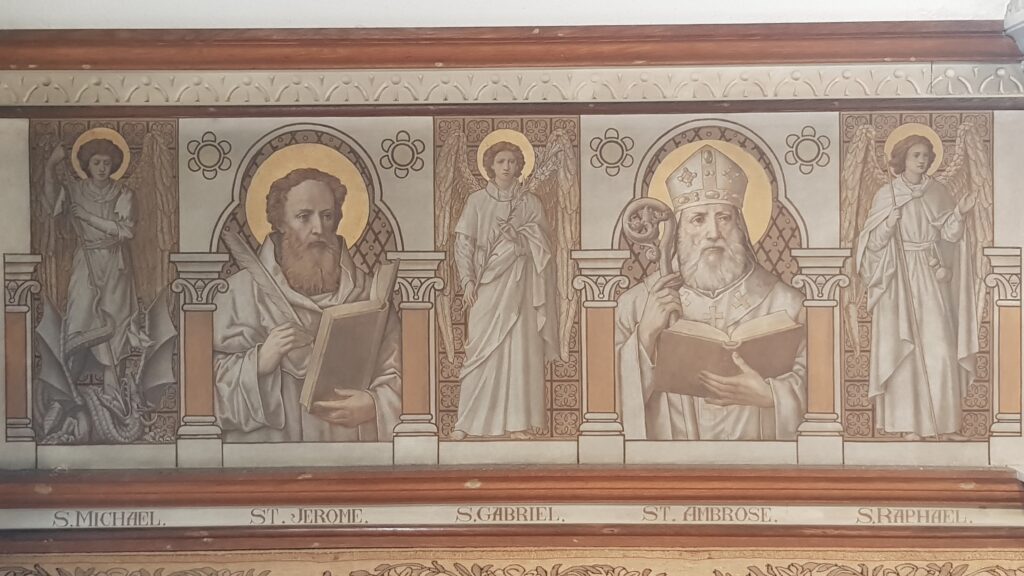 St Michael: Archangel Michael (Hebrew: Who is like God)  is portrayed plunging a spear into a dragon (Satan); St John saw  Michael in heaven leading a war against Satan, whom he cast down to earth (Revelation 12 7-9)

St Jerome: (341 - 420 AD) is shown with book and quill dressed in a monk's habit. He studied in Rome before becoming a hermit in Syria for five years where he learned Hebrew. After being ordained a priest  he went to Constantinople before returning to Rome working alongside the Pope. He left Rome and founded a monastery in Bethlehem, hence the monk's habit. His most famous work in a standard Latin text of the Bible, known as the Vulgate.

St Gabriel: Archangel Gabriel (Hebrew: God is my strength) appears in the Bible chiefly as an announcer and interpreter of messages from God. Through his association with the Virgin Mary, he is shown with a lily (this being her chief attribute).

St Ambrose: (339-397 AD) is shown with bishop's robes, crozier and book. He was a lawyer and governor based in Milan, and later the unexpected Bishop of Milan. His writings are best known for their work on the sacraments and the role of the clergy.

St Raphael: Archangel Raphael (Hebrew: God is my health) is the leader of the Guardian angels. He is shown with a pilgrims staff, clothes and pouch by reason of his adventures described in the Book of Tobit in which he accompanies Tobias on a long journey.

St Uriel: Archangel Uriel (Hebrew: God is my light) is considered the fourth archangel and is depicted here with a scroll and a book representing wisdom.

St Augustine: (354-430 AD) is shown bearded and in bishop's robes carrying a crozier and book. After a long internal struggle, an encouragement from St Ambrose, he was baptised in 386. He led a quasi-monastic life in Africa before becoming a priest and finally Bishop of Hippo.

St Chamuel: Archangel Chamuel (Hebrew:) is shown with a staff and a cup as he is traditionally supposed to have strengthened Jesus during the Agony in the Garden.

St Gregory: (540-604 AD) is shown in papal robes with his papal tiara (crown) and a crucifix. He was the son of a wealthy Roman senator but after a spell in government used his wealth to found a number of monasteries and took up an austere monastic life himself. The Pope sent him to be his ambassador in Byzantium after which he returned home to become abbot in his old monastery. He was elected Pope when the previous incumbent died of the plague. In addition to his many writings, he has a long association with church music and the term Gregorian chant comes from him.

St Jophiel: Archangel Jophiel (Hebrew:), shown with a flaming sword, is reputed to have been the angel who guarded Eden after Adam and Eve were driven out.