At the time of the Consecration in 1902, it is probable that most if not all of the windows were of plain glass, as some of those in the chancel and transept still are. All were installed within the first 25 years  of completion of the building so while none are likely original they can all be considered contemporary.

The many stained glass windows surrounding the Aisle were given in memory of various parishioners, each illustrating a different saint and incorporating an appropriate description.

Back to church plan 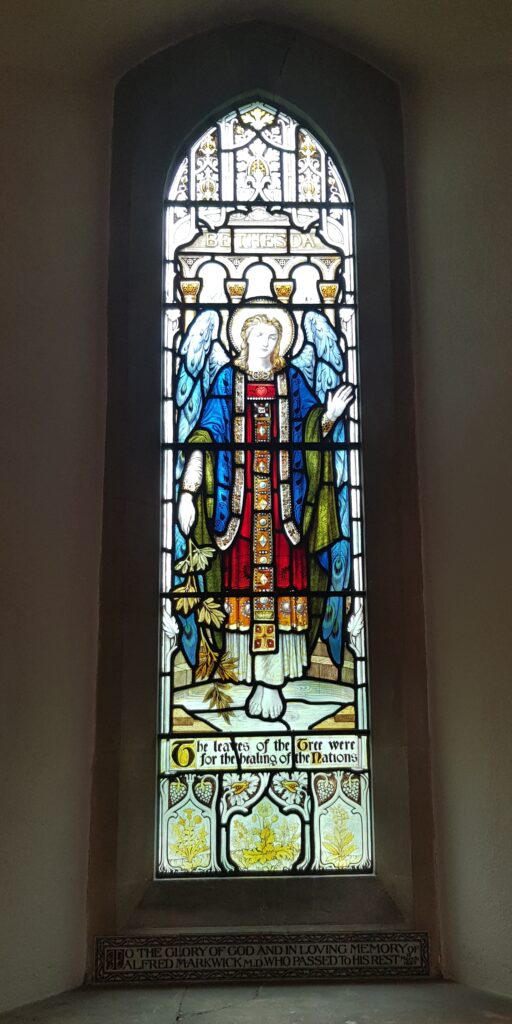 This window, found on the North side of the Aisle, shows the 'angel of the waters ' refers to the healing of the paralytic at Bethesda, a story from the Gospel of John about an angel blessing the Pool of Bethesda, giving it healing powers. The scripture below reads "And the leaves of the tree are for the healing of the nations" and is taken from The Book of Revelation Chapter 22, verse 2 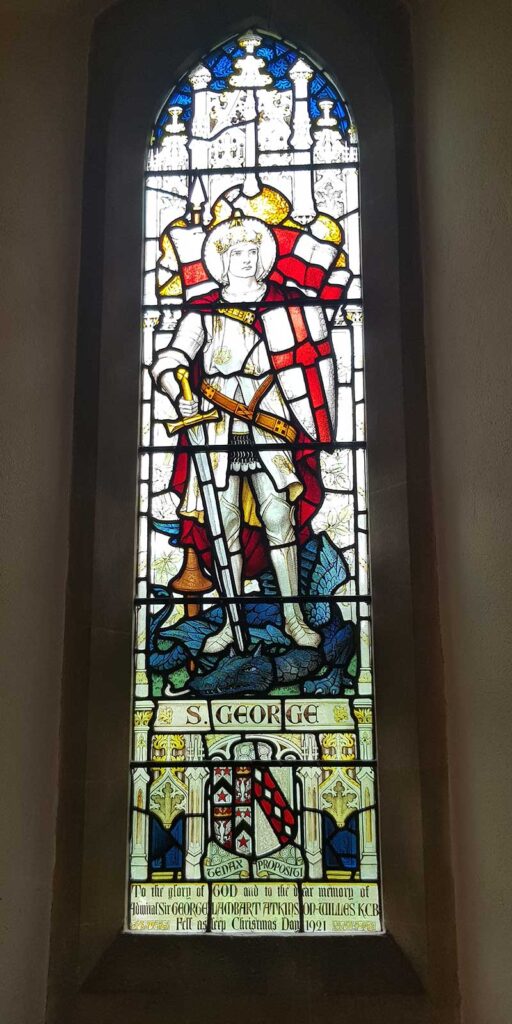 St George, patron saint of England since the fourteenth century, and the warrior saint is depicted on a window on the north side of the church. 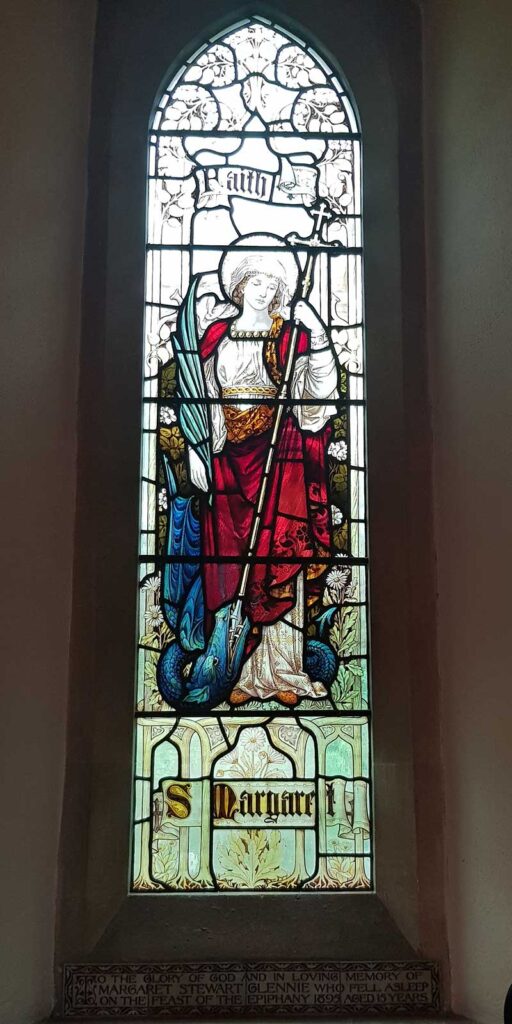 There are many legends surrounding St Margaret but many attest that she was the daughter of a pagan priest at Antioch in Pisidia. She was converted to Christianity by her nurse, whereupon she was driven from home by her father. She became a shepherdess and when she spurned the advances of Olybrius, the prefect, who was infatuated with her beauty, he charged her with being a Christian. He had her tortured and then imprisoned. While she was in prison she had an encounter with the devil in the form of a dragon. According to the legend, the dragon swallowed her whole, but the cross she carried in her hand so irritated his throat that he was forced to disgorge her.

The window shows the saint at the moment before she is swallowed alive by the dragon. She is shown unafraid, holding the crucifix that will save her once she is swallowed. Faith is an appropriate legend, given the many who converted to Christianity after witnessing her testimony.

Of such is the Kingdom 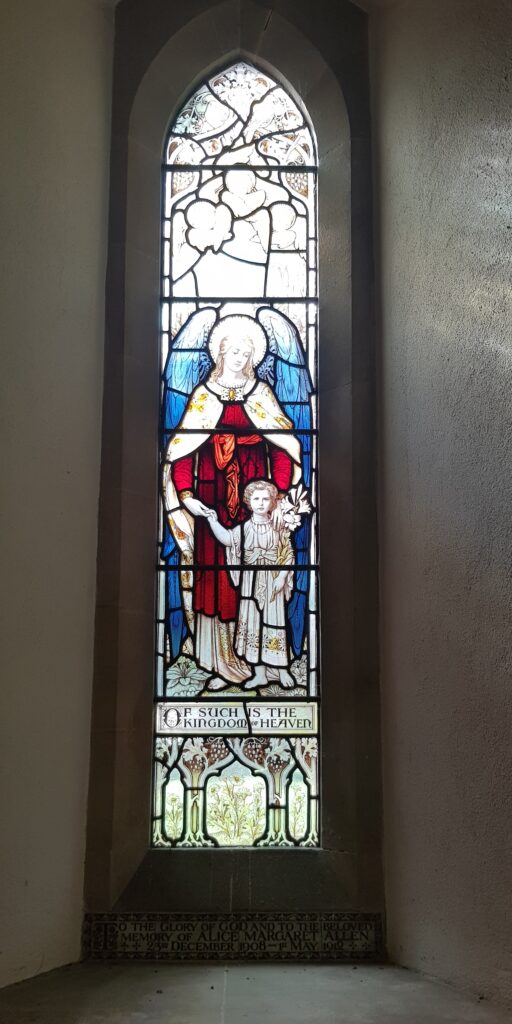 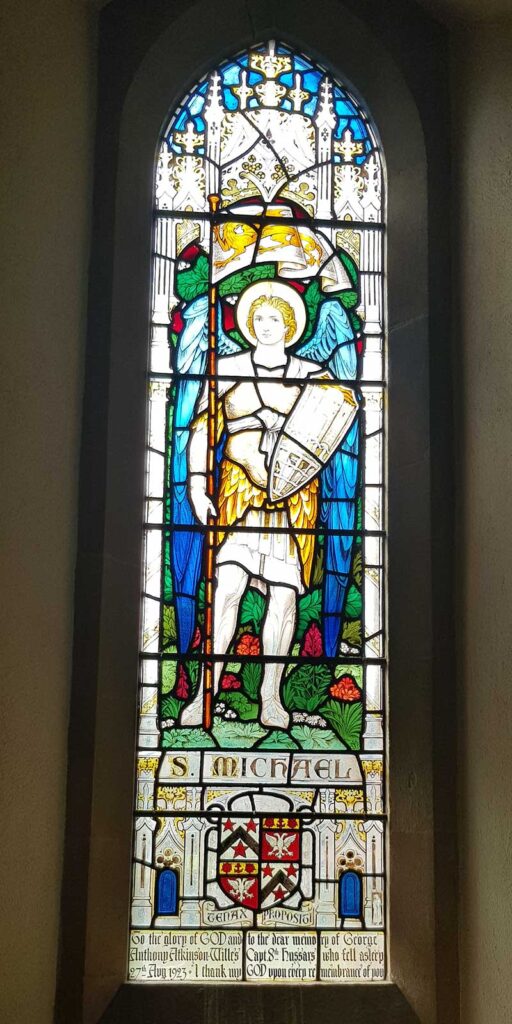 Michael, leader of the Archangels, is shown in this window located on the south side of the church with his shield, staff and golden wings. The defeat of Satan told in the Book of Revelation (Chapter 12 verses 7-12) is symbolically represented by the caged dragon on Michael's shield.

The lower portion of the window contains a dedication which reads: "To the glory of God and the dear memory of George Atkinson-Willes Capt 8th Hussars who fell asleep 27th August 1923 + I thank my God upon every remembrance of you" and incorporates the familial coat of arms. 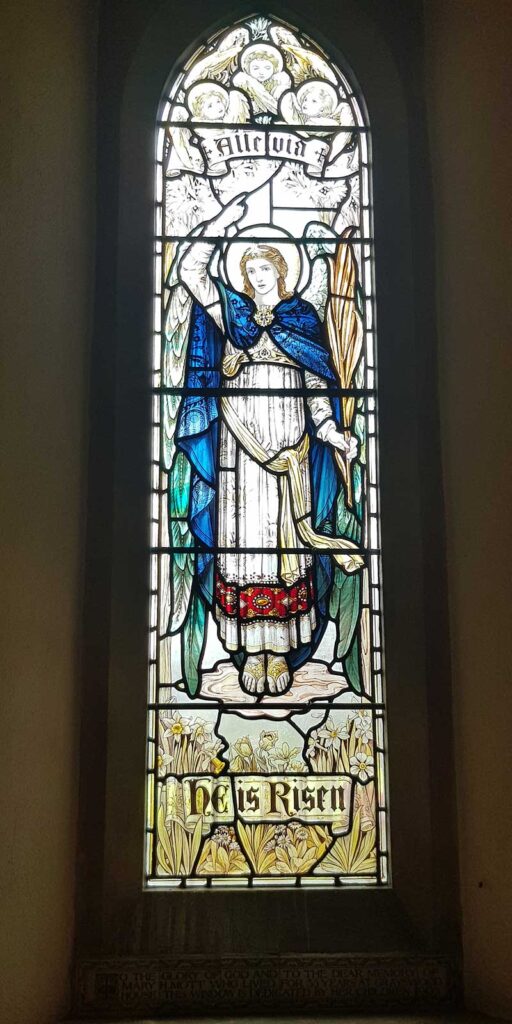 He is Risen - This window on the south side of the church depicts a winged figure with arm raised. The Angel of the Resurrection says to the Marys at the tomb where they seek their crucified Lord, “Do not be afraid, for I know that you are looking for Jesus, who was crucified. He is not here; he has risen, just as he said" (Matthew Chapter 28, verse 6). The window bears the Easter acclamation. "Alleluia. He is Risen."

The dedication reads "To the glory of God and to the dear memory of Mary H Mott who lived for 35 years at Grayswood House. This window is dedicated by her children 1903". 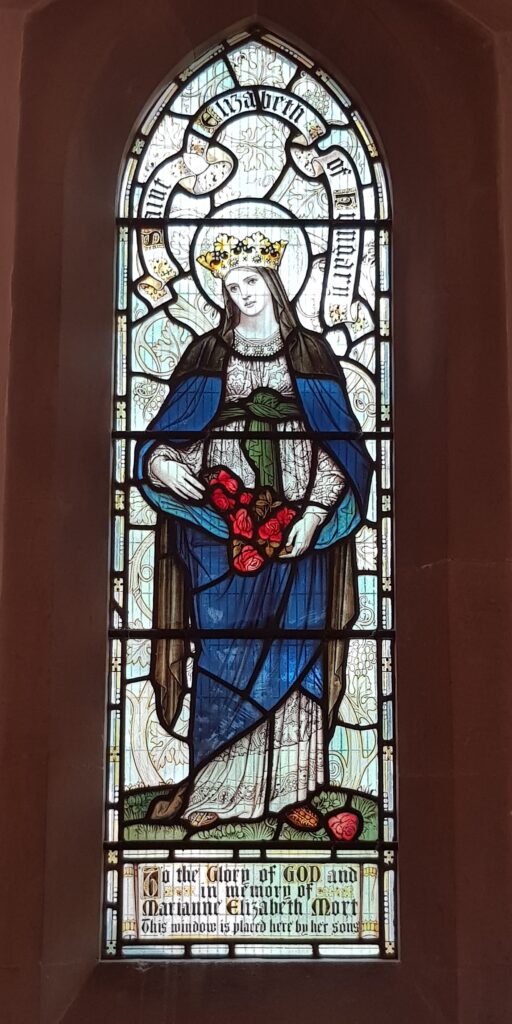 This window is found in the north of the Chancel and depicts St Elizabeth of Hungary.

Elizabeth is perhaps best known for her Miracle of the roses which can be seen in the window. While taking bread to the poor in secret, she met her husband Ludwig on a hunting party. Ludwig, to quell suspicions of the gentry that she was stealing treasure from the castle, asked her to reveal what was hidden under her cloak. In that moment, her cloak fell open and a vision of white and red roses could be seen, which proved to Ludwig that God's protecting hand was at work.

The dedication reads "To the Glory of God and in memory of Marianne Elizabeth Mort. This window is placed by her sons"